Home / News / Brno is experiencing the strongest demand in history

Brno is experiencing the strongest demand in history

CBRE, the world leader in commercial real estate services, has noted an increased interest in office space in Brno, where more than 57,000 square meters of office space was leased in 2016, making it the highest in demand on the office buildings market in the region, which has been continuously growing since 2014. This positive trend was supported by the construction of 43,300 square meters of the new office buildings, which were delivered to the market in the second half of 2016. Ostrava is another important regional location on the office buildings market.

Brno, after the capital city, is the second most important destination on the office market. Take-up reached over 26,200 square meters of office space in the second half of 2016, representing a 14% decrease compared to the previous half year. Nevertheless, 2016 was the strongest in history in terms of demand. The largest non-confidential deals were the new lease of AT & T in Campus Science Park C, followed by the expansion of Edwards Services in Spielberg Tower with a total area of 3,600 square meters and the renegotiation of an existing lease agreement with Regus in Spielberk Office Center in the second half of 2016. The total modern office space in Brno stood at 525,100 square meters, of which 80% was of class A quality. The city-wide vacancy rate slightly increased in Brno to 12.1%. 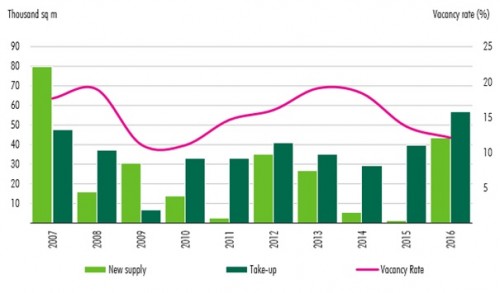 According to our data, interest in offices in Brno is constantly growing, with the strongest demand in this region in history being seen in 2016. For that reason, many new development projects have also been implemented. The construction of four buildings totalling 43,300 square meters was completed in the second half of 2016 in Brno, the office centres Dom, Campus Science Park C, CTOffice A2 and Campus Slatina. Another 44,300 square meters of office space is currently under construction.

However, decreased interest in office space at the regional level was recorded in Ostrava, which is a much smaller market with a total volume of 208,400 square meters of modern office space. Take‑up in second half of year 2016 reached 2,700 square meters representing a 72 % decrease compared to the first half of 2016. The largest deal in the period was a new lease of a confidential tenant at Axis Office Park Ostrava with an area of 1,500 square meters. A negative development is the fact that there were no new office buildings delivered to the market in 2016. However, there are two projects under construction in Ostrava, the office complexes Red House and ABC Alfa with a total area of 11,000 square meters, where construction is expected to be finished this year. A positive trend was the vacancy rate, which decreased to 19.7% in the second half of 2016.