Home / News / Could the metals shortage derail the energy transition?

Could the metals shortage derail the energy transition?

Amid worldwide efforts to go green, high demand for basic and precious metals along with supply chains that have been disrupted by a pandemic and now the Russia–Ukraine crisis are causing major challenges.

As disruption in energy supplies continues to reverberate throughout the world’s economies, another equally insidious, if less conspicuous, disruption is unfolding: shortages of key basic and precious metals.

Spasms in the oil and natural gas markets, followed by those in agricultural commodities, have dominated the headlines since sanctions were imposed on Russia earlier this year. But the preoccupation with these shocks has obscured how sanctions are affecting the metal markets—in particular, base and precious metals. Whether they involve spare parts or new technologies, sanctions could have longer-term consequences for everything from the sustainability of mining operations to the functioning of the manufacturing base. Apart from exacerbating COVID-related disruptions, these supply chain disruptions are compounding the price pressures associated with the global shift to an electric economy.

The long reach of sanctions

In early 2022, just as the world economy was rebounding from COVID-19 and production operations were resuming, commodity prices spiked but soon began to stabilize. Then the Ukraine–Russia conflict erupted, triggering sanctions unprecedented in scale and speed on one of the world’s biggest exporters of raw materials. As of early November, Russia has been hit with more than 12,000 sanctions—four times the number imposed on the next most penalized country, Iran.

Russia’s biggest commodity players may be the most prominent of the sanctioned entities, but the sanctions affect far more than the sale of their commodities. Consumers, primarily those in Europe—the region that accounts for about half of the sanctions—have also felt the effects as many European and US companies in multiple industries suspended their Russia operations. Among those companies are the leading logistics companies—the likes of Maersk, MSC, and CMA CGM—which transport solid commodities throughout the globe, from raw materials to semi-finished products (such as rolled steel and copper rods) to finished products (such as wire).

Supply bans pinch the supply of spare parts for aircraft and heavy machinery, including hauling and loading equipment, tractors, assembly line machinery, and drilling equipment. The resulting crunch in equipment availability is already dampening activity across many sectors, from manufacturing and construction to agriculture (itself at risk, with the farming disruptions in Ukraine and global fertilizer shortages).

Direct export bans on steel imports (into the European Union) and crude oil (into the United States) have sparked price increases and forced a partial redirection of exports. But other, less direct sanctions have equally deep and often longer lasting impacts. For example, the export restrictions that have prompted companies such as Maersk to suspend operations have forced shippers to rely on inland channels—that is, where such channels exist.

The EU and US bans on Russian non-carbon commodities have made China and other Asian markets the default main importers of Russian raw materials (see figure 1). But that works only as far as infrastructure allows. In fact, the existing infrastructure is insufficient for handling the redirection of raw materials in their full volumes. 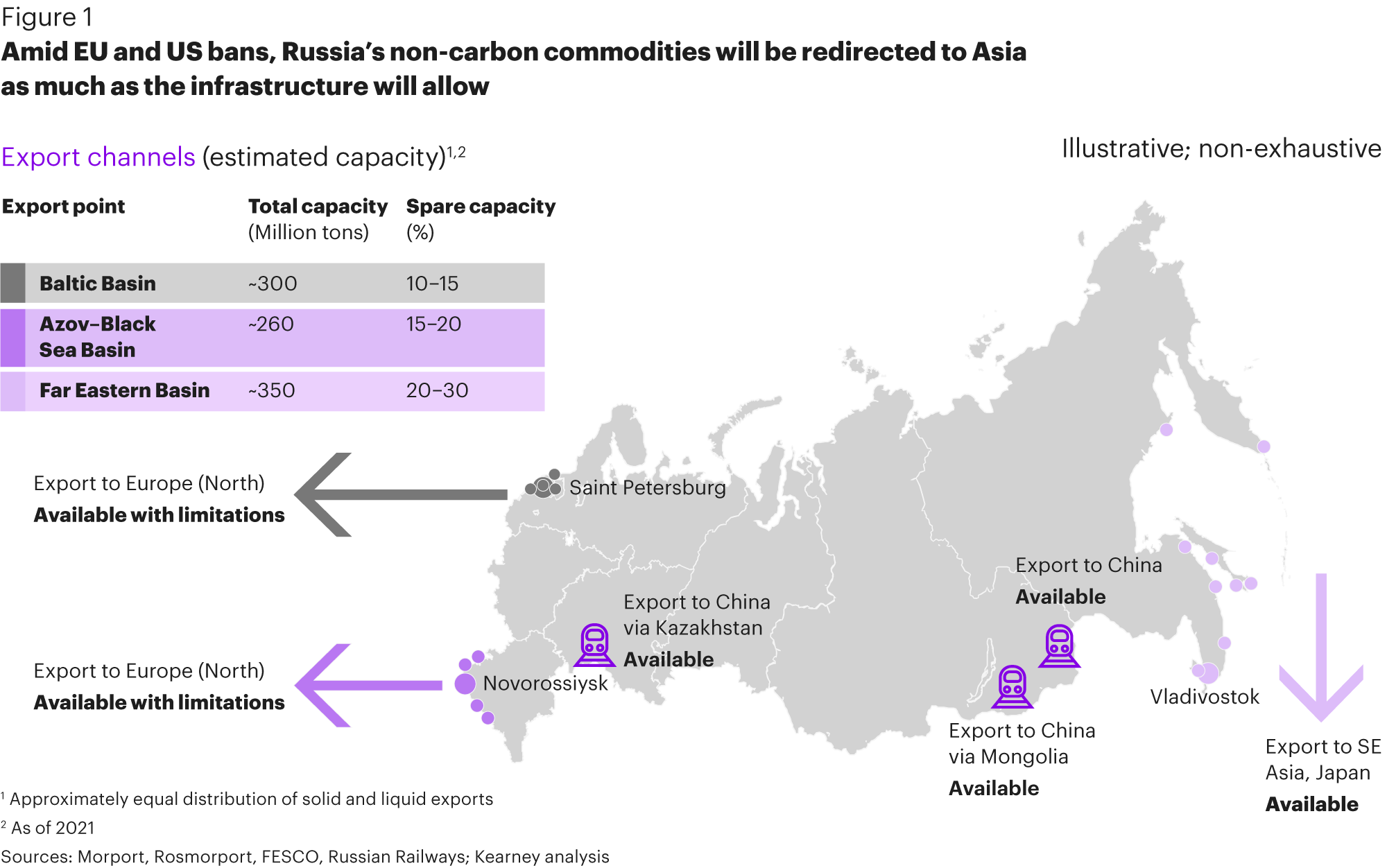 Rail channels have historically lacked spare capacity, and that’s unlikely to change anytime soon. Moreover, the capacity at marine ports seems to be inadequate for current volumes. That is certainly the case at St. Petersburg, a key Baltic Basin port. Azov–Black Sea Basin ports, which can serve more destinations, have only marginally extra capacity. In addition, ports need to be situated in a reasonably direct path to those alternative destinations; St. Petersburg, for example, only makes sense for shipping to Europe. But infrastructure isn’t the only obstacle: the suspension of foreign shipping operations has triggered a worldwide container shortage.

Beyond affecting the export of commodities, imposed sanctions have also complicated the importation of goods along with providing some professional services, related to commodity manufacturing (such as exploration, deposit modeling, and many others), which in turn can jeopardize the very production of those exports. For example, most of the mining equipment used in Russia is made in the United States or Europe—equipment that includes not only spare parts needed to maintain current operations, but also new technologies that deliver efficiency and safety improvements. While a complete discussion of applicable sanctions rules is beyond the scope of this article (and has many complexities), it appears that at least some companies have responded to the new rules by importing equipment by a more circuitous route, crossing at least two additional borders, to reach mine sites in Russia.

As a result, the reliability of current operations is put at risk, and new projects are either difficult to launch or else put on hold. Aging infrastructure poses environmental risks, as we saw with the 2020 diesel spill at Norilsk Nickel, Russia’s worst-ever Arctic environmental disaster. China may have been able to fill the gap, but ongoing COVID-related shutdowns and supply chain interruptions have made that difficult, if not impossible.

Meanwhile, the financial sanctions recently imposed by the UK have even prompted merger talks between Norilsk and Rusal—two otherwise unlikely partners—to bolster their stability.

So, what do these sanction-induced shocks mean for metals?

Base metals. Since early 2022, the five base metals that Russia produces have experienced sharp price increases (see figure 2). Continued supply disruptions are likely to keep prices climbing for some of them. Nickel (for which Russia accounts for roughly 10 percent of world output) is likely to see significant long-term increases, thanks to the growing demand for electric vehicles (EVs) and non-fossil-based energy and the metal’s importance in electronics and steel production. Ironically, EV demand is being fueled by the commodity disruption that the sanctions sparked, leading to a sharp increase in fuel prices worldwide. Aluminum and copper (for which Russia produces 5 percent and 4 percent, respectively, of global output) are expected to experience moderate price increases. Apart from their many industrial applications, they too figure largely in EV production and ecofriendly materials applications. The price of iron and zinc (for which Russia accounts for 4 percent and 2 percent, respectively, of global share) will likely stabilize, as the EU and US economies slow down. 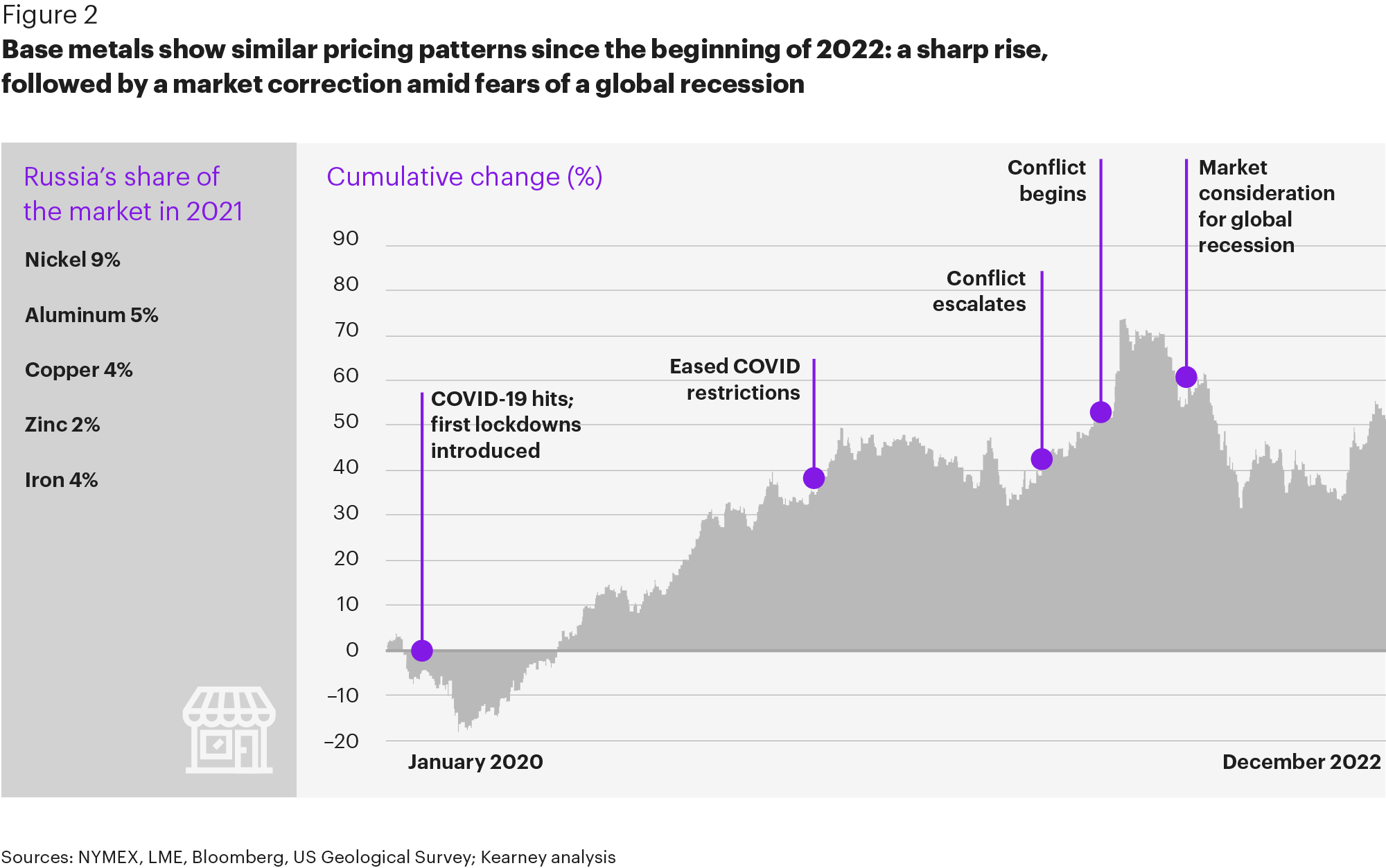 Nonetheless, because Russia produces a relatively minor share of these base metals, these markets will rebalance or at least will be affected mostly by other factors rather than limitation on imports. The output that cannot be rerouted because of the logistics limitations will create some market deficit, but it is not expected to cause serious long-term consequences.

Precious metals. The longer-term picture for precious metals, however, is a different story. So far, the effect on precious metal prices has been modest, and price volatility has been much lower than that of base metals but most likely not for much longer (see figure 3). Given the overall significant portion that Russia accounts for and the role these commodities play in the evolving modern economy, increases are highly likely. 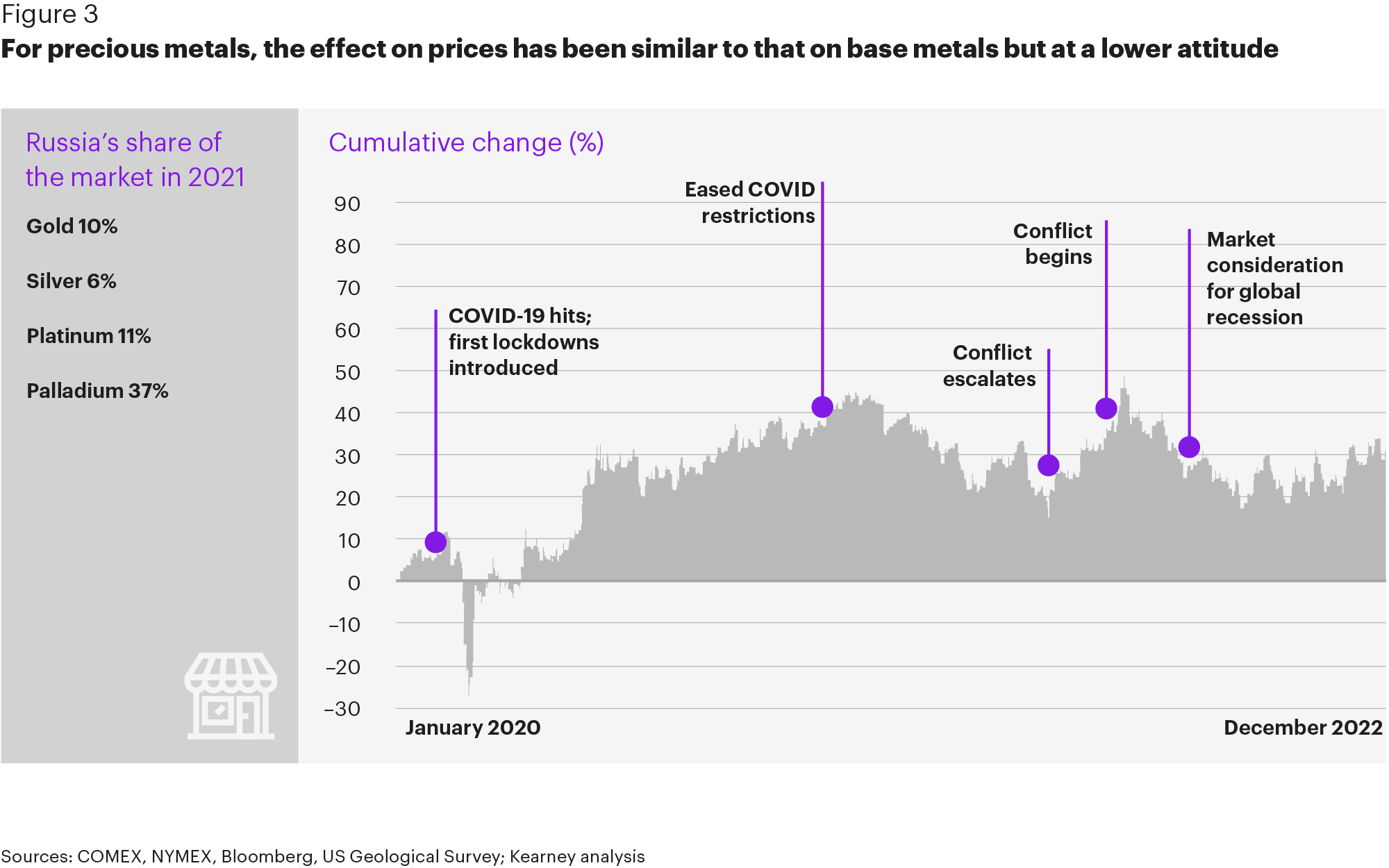 Silver is the least worry, mainly because of the lack of direct sanctions and Russia’s minor share of global production (6 percent). Gold is likely to see moderate price increases; as a safe haven investment, it is subject to big swings, particularly in periods of uncertainty. Russia produces a substantial portion of the world’s supply (10 percent), and it’s possible the country will sell national reserves as the cost of the Ukraine–Russia conflict and the sanctions take a deeper economic toll.

The biggest increases are expected in the platinum group. Russia accounts for 37 percent of the world’s supply of palladium and 11 percent of supply of platinum, which is essential for hydrogen-based energy technologies as well as for alloys, autocatalytic converters, circuit components, and ceramic capacitors. For now, market and pricing drivers are pointing toward long-term price increases in these metals.

Widespread disruption in the commodity markets is now a fact of life, and a protracted military conflict raises the risk of new sanctions every day. Industries such as defense, electronics, and heavy equipment are particularly vulnerable, and some companies (and some projects) may be unable to withstand the strain and maintain operations.

Demand for the commodities that are essential for an electrification- and renewable-energy-based economy is growing—and with it, their prices. It’s worth noting that EVs use more than six times more minerals than internal combustion-powered vehicles and that an offshore wind plant requires more than seven times the copper that a gas-fired plant takes. The price increases are already affecting industry. In June, Ford’s CFO announced that surging materials costs for batteries have wiped out the profit the company was expecting to make on its electric Mustang model Mach-E. Already, more than a dozen renewable energy developers are postponing, cancelling, or renegotiating battery projects for power storage, in part because of soaring material costs.

For most of the base metals that Russia produces, the balance in global supply will not change significantly. Soon, prices will most likely revert to global consensus-forecast levels. But for those metals for which Russia is a critical supplier and for which maintaining operations has always been a challenge—namely, nickel and precious metals—the price increase is here to stay. Supply disruptions are likely to affect global markets.

Beyond their financial consequences, these developments pose an enormous challenge to the global energy transition. On one hand, disruption in the carbon-based energy supply from one of the largest players in that market will provide a strong impulse for the energy transition, which many analysts have already acknowledged. On the other hand, Russia—an essential player in the metals and minerals markets—will play its role in supporting or postponing that transition. At this pivotal moment, it’s not the public’s resistance that threatens the shift; it’s whether the market can find enough critical raw materials needed to support it.

Interested in learning more about our metals and mining expertise?