Entrepreneurs, especially in industry, became more optimistic in August, helping to boost overall levels of confidence, even as consumer sentiment slipped. This is no game changer for the central bank, which we expect to hike rates further this year

From May peak to the lowest level this year

Consumer confidence declined for the third month in a row to the lowest level this year but some context is needed. In May, confidence was at historically high levels and even with the recent decline, it remains strong, with the August figure higher than the 2017-average. Nonetheless, households have raised further concern about the economic situation over the coming year and intentions to save money have declined- which was the main factor behind the dip in the August print.

Households worry about the future

The main reason for the decline in household confidence is probably related to concern about the escalation of trade wars, which could undermine current favourable economic developments. Unlike business indicators, the consumer confidence indicator is based mainly on household expectations over a one-year horizon (in terms of economic developments, the financial situation, intention to save money and the path of unemployment). The indicator thus responds more to the moods and concerns of households than to the current situation. In light of recent business uncertainty, it's no great surprise that consumer confidence has recently deteriorated, though the  real situation remains favourable due to historically-low unemployment and rising wages. 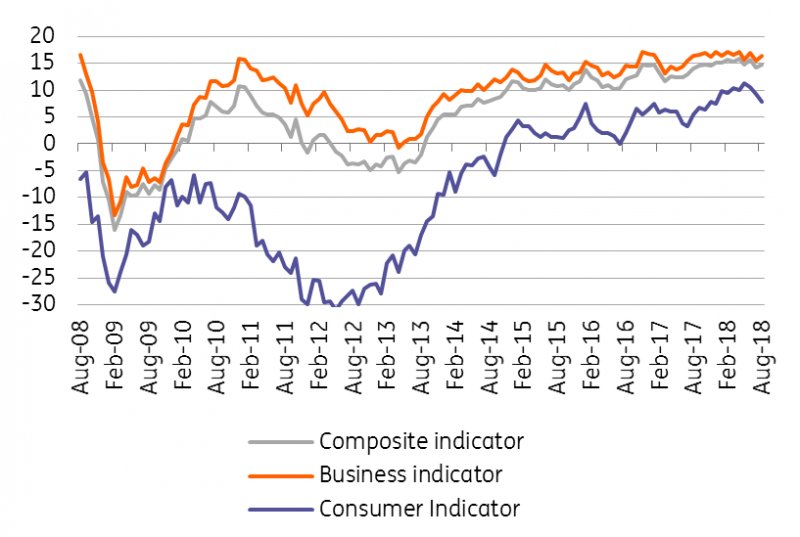 Business confidence increased in August after a decline in the previous month. An increase in confidence was apparent in all the monitored business segments besides retail trade. Looking closer, however, lower confidence in the retail segment was also weighed down by a deterioration in the expectations component, while the current situation has stagnated in monthly terms and is only slightly below this year's average. Meanwhile, the current assessment of demand in industry  improved in August after a sharp decline in July to the lowest level since the beginning of 2014.

Given uncertainty regarding trade tensions, we consider August confidence figures to be positive  and do not think that weaker confidence in the household sector will jeopardise the central bank's intention to tighten monetary policy further this year. One more hike this year is a done deal, in our view, and the chances of an additional hike are gradually increasing as the koruna remains at relatively weak levels.