August's confidence slightly increased due to higher confidence in services, while households’ confidence declined close to the year-to-date average and confidence in industry remains at its 6-year low.

A slight decrease in household confidence in August was due to higher consumer concerns about the future economic situation combined with rising concerns about higher unemployment. Consumer confidence, however, increased rather surprisingly in July, so the August value thus returned to the May and June levels, only slightly below this year’s average. This is at the level of 2016, which represents a weaker figure in the context of the last few years, but it is still relatively positive in terms of longer-term development.

Business confidence increased slightly in August, mainly due to higher confidence in the service sector, where confidence has been steadily declining in recent months. The growth of confidence in services was driven mainly by better assessment of demand in the last 3 months, which is rather a backward-looking assessment than any forward-looking guidance. The same holds for higher confidence in retail trade driven by a lower level of stocks in August. On the other hand, confidence in industry remained unchanged in August and still the lowest in almost six years. The situation in the construction industry again deteriorated slightly, thus being the weakest since October last year. This due to expected developments in the coming months, while the assessment of current demand has remained similar in recent months. 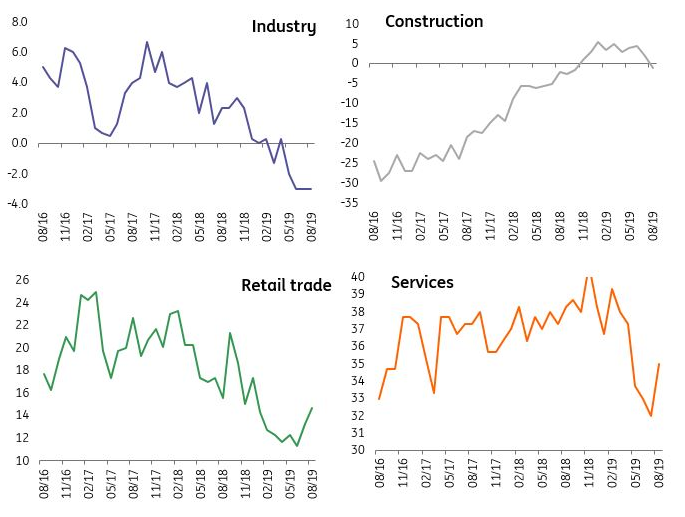 Today's confidence indicators have improved, but due to Friday's escalation of trade wars, they are already somewhat outdated, see China hits back with surprise tariffs. As such, the uncertainty arising from the trade wars is increasing and will further complicate the situation especially in the manufacturing industry, which will gradually spill over into the domestic economy. And the latest August German Ifo index does not bring more optimism in that respect, see Germany: Still free fallin’.

The CNB on hold as most likely scenario for now

From the perspective of Czech National Bank rates setting, however, rates stability seems like the most likely scenario now. The CNB model itself sees room for a rate hike owing to continued wage growth and inflationary pressures, but the CNB Board is aware of risks coming from abroad and assess the current forecast as too optimistic. A number of board members including Governor Rusnok signaled in recent days/week that stability of interest rates in forthcoming quarters seems like the most likely scenario right now, which is also our base case.