Home / News / Czech inflation close to the 2% target in April

Czech inflation close to the 2% target in April

Inflation picked up in April after slowing down since October. Core inflation also accelerated further and we continue to expect two interest rate hikes in the second half of the year.

April inflation accelerated slightly to 1.9% in April from 1.7% in March, beating the market consensus of 1.8% and in line with the latest estimate from the Czech National Bank. In month-on-month terms, prices rose slightly by 0.3%.

The year-on-year acceleration in inflation was mainly due to higher prices of alcoholic beverages and tobacco, which accelerated to 3.8% in April from 2.0% in March. Prices in the housing category also picked up slightly due to higher rentals, water supply, sewage collection and electricity. Prices have also picked up slightly in the transport category. On a month-on-month basis, prices in April mainly rose in the clothing and footwear category, which is the typical seasonal pattern.

Structure of inflation in the Czech republic 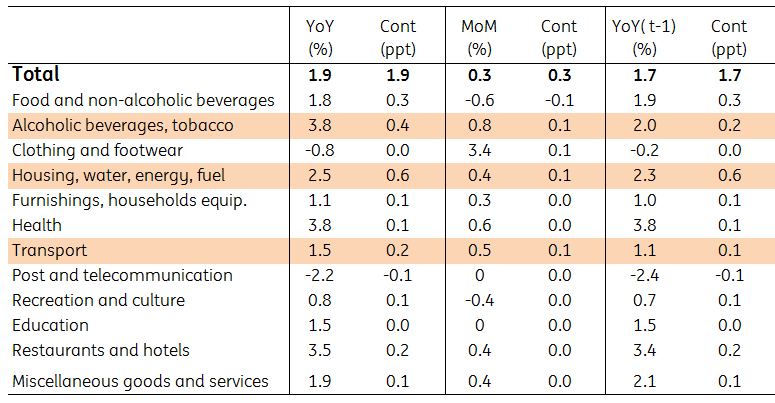 April inflation accelerated slightly for the first time since October last year. However, this year's slowdown is the result of a high comparative base, as prices began to accelerate at the turn of 2016/2017 due to a rise in food prices and restaurant prices after the introduction of online sales registration. The gradual appreciation of the koruna has also played a part. However, the most important factor was a slowdown in food prices. While food prices grew by 6.4% on average in the last quarter 2017, their average growth reached just 2.6% year-on-year this year (contribution declined from 1.1ppt in 4Q17 to 0.4ppt in 2018). As such, lower inflation this year is mainly due to weaker growth in food prices.

Close to target in the months ahead

Inflation will remain close to the 2% target over the next few months, however inflationary pressures should continue to grow further, owing to positive developments in the overheated labour market and rising wages. As today's figures confirm, the labour market is still developing favourably. The April share of unemployed people further declined from 3.5% in March to 3.2%.

Inflation below target no issue for the CNB

From a monetary policy point of view, the recent slowdown in inflation is not a major problem as it is a supply-side impact driven by food prices. On the other hand, prices of services, which better reflect the current economic situation and demand-driven inflation, accelerated to 2.6% YoY in April, and core inflation (CPI excluding food and fuel prices) accelerated close to 2% last month.

Looking at data available today, average inflation should reach 1.9% in 2018, but should accelerate next year slightly above the 2% CNB target. We continue to expect that the CNB will increase rates twice in the second half of this year because the Czech koruna will not strengthen as fast as the CNB expects in its latest forecast (24.6 in 4Q18), which will allow the central bank to deliver monetary tightening via interest rates.