Czech inflation slows to 2.7% in September

Czech price growth slowed in September to 2.7% YoY, mainly due to a decline in food prices. The fear of some CNB Board members of exceeding the 3% tolerance band thus declined, which should make the debate about a potential rate hike less intense during the November monetary meeting

In month-on-month terms, prices fell by 0.6%. This is mainly due to the fact that holiday prices usually fall in September, after strong growth during the summer months. This was apparent this year when their prices dropped by a strong 24% MoM, pushing the recreation and culture category down. Food prices also fell slightly due to the falling cost of vegetables. As such, annual food price inflation slowed from 3.9% in August to 2.5% and represents the main reason why September YoY inflation slowed down (see the table).

This year, several items have been driving Czech CPI growth, especially housing prices, which are 5% higher in YoY terms due to a double-digit increase in electricity prices, but also rents and imputed rent due to the overheated property market. This year, housing prices account for more than half of the growth in inflation. However, imputed rent (contributing 0.5ppt to inflation) started to gradually decelerate, reaching 4.4% YoY in September after 4.9% in August and 5.5% in July. This is be driven by decelerating property prices, which we expect to occur from 3Q19, see Czech Republic: Property price growth strong, for now

Inflation structure in the Czech economy 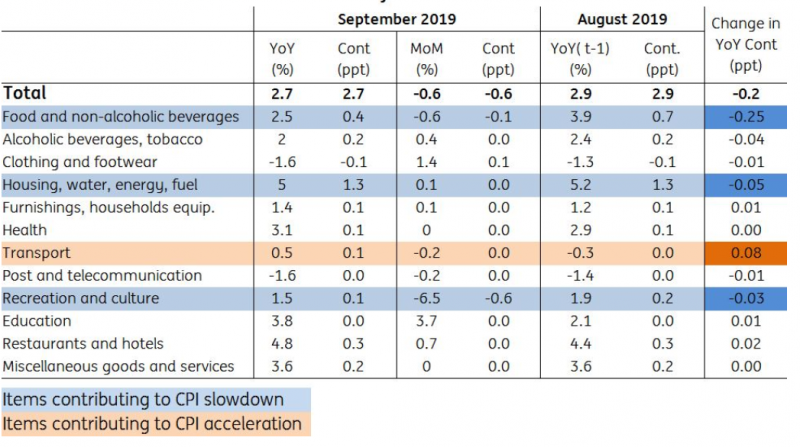 In general, the prices of services are growing at a fast pace this year; in September their year-on-year dynamics slightly accelerated from 3.8% to 4%. This acceleration, however, was driven by the fact that discounts for public transport, introduced in September 2018, fade away. This item is taken as “regulatory” prices in the Czech National Bank methodology, therefore CNB core inflation has not accelerated, but decelerated to 2.6% YoY according to our calculations (after 2.7 in August and 2.8 in July).

Also, it's worth mentioning that the rise in the price of services (and also core inflation) is, to some extent, linked to the rise in the cost as such things as food or energy (eg. in restaurants prices). It is not purely inflationary pressures driven by demand, but prices, which monetary policy should not take into account.

The CNB on hold despite its recent hawkish rhetoric

The slowdown in inflation from 2.9% to 2.7%, below the upper boundary of the 3% tolerance band, will provide a degree of relief to some of the more sensitive CNB Board members. The fear of breaking the 3% tolerance band was probably the reason why Marek Mora also voted for a rate increase at the last meeting (together with Vojtech Benda).

However, the CNB should not fight yesterday's battles. Rising rates would not reduce current inflation; the CNB would only expose itself to a significant reputational risk, similar to the ECB in 2011 if, after a rate hike, the economic deceleration continues given the risks abroad. Taking into account global economy uncertainty and the fact that inflation is about to slow down in the monetary policy horizon, CNB rates will remain on hold this year, in our view.