April inflation slowed down to 3.2% from 3.4% in March. Lower fuel prices, which fell by 10% in April, were to some extent compensated by increasing food prices. Deflationary risks seem to be far off, though inflation will further decelerate in the months ahead.

April CPI slowed down to 3.2% from 3.4% in March, influenced mainly by the two usual suspects:

Structure of inflation in the Czech economy 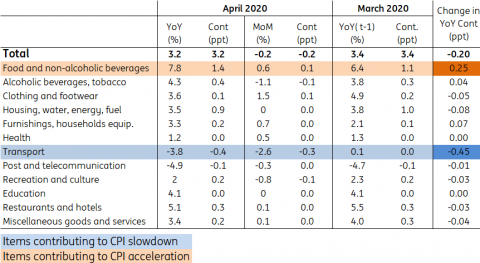 Deflation risks seem to be far away

The April data was broadly in line with expectations, with the Czech National Bank pencilling in a slightly weaker print of 3.0%. We expect CPI to further decelerate this year, to an average of 2.5%, while the CNB expects 2.8% on average, but deflationary risks seem to be still relatively far away. And the risk of deflation is the main pain threshold for the Czech central bank to approach more controversial (in Czech standards) monetary policy tools, like QE or FX-floor renewal. Today’s CPI print suggests that this scenario is still far away, as we already noted in CZK: Very high bar for renewal of FX floor, though measuring of CPI during the lockdown in April brings a lot of challenges and May CPI might bring more reasonable figures from this perspective.