Czech unemployment rate rises, but so do job vacancies

Unemployment is usually higher in July

The share of unemployed people in the Czech Republic increased from June’s 2.9% to 3.1% in July. The increase is down to seasonal factors we often see at this time of year. As the holidays begin, some new graduates and school leavers are actively looking for work. We also see slower recruitment during the holidays. A smaller increase in the unemployment is typical for July, and the market expected unemployment to grow to only 3.0%; the slightly higher figure was given by a small variation, as the exact rate of unemployment in June was 3.065%. 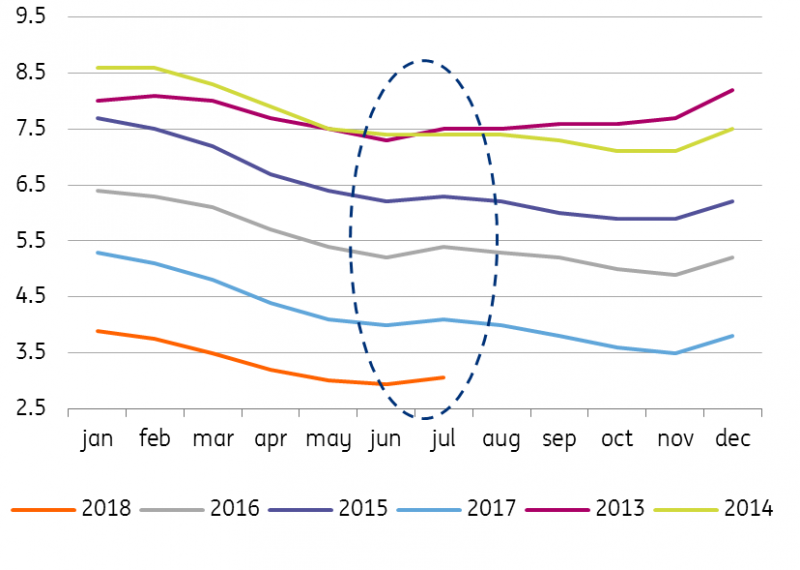 That said, the labour market tightened further in July. Job vacancies once again reached a new high and increased to 310- thousand. Compared with a year ago, there are almost 122-thousand more jobs in the domestic economy (more than 65% YoY) and 71.5-thousand fewer unemployed, which is a 23.6% year-on-year decline. As a consequence, the number of job vacancies has exceeded the number of unemployed people since April. Favourable too is the fact that long-term unemployment is decreasing; the number of applicants who are registered for more than 5 months fell by 57.5 thousand (32.6%) year-on-year.

Room for further decline is limited

Unemployment is already at such a low rate that it is declining more slowly than in the past. However, its development is still slightly above expectations. The CNB's new forecast expects the share of unemployed to decrease to 3.2% this year, the latest forecast from the Ministry of Finance is 3.3%. Compared to the previous year of 4.2%, this is another noticeable decrease. For next year, a slightly smaller figure is expected because there's so little room left for further decline.