Home / News / Czechs still like to shop in shopping centres, despite the growing popularity of e-shops. Turnover and footfall are growing.

Czechs still like to shop in shopping centres, despite the growing popularity of e-shops. Turnover and footfall are growing.

According to the newest CBRE Shopping Centre Index study, which has been compiled for the seventh year by the CBRE company, the world leader in the field of retail services, shopping centres in the Czech Republic have been successful again. Turnover in Czech regional shopping centres grew for the fifth consecutive year. Comparing the year 2017 with the previous year, turnover grew 4.2%. Rents grew only minimally. The vacancy rate is stable. The “Rent-to-sales ratio” reached a historical minimum and the average basket achieved its historical maximum. This once again proves that Czech retail is doing well.

Since 2014, we have seen an upward trend in turnover, which achieved record values over the last five years and therefore showed total revenue grew of 35% over this period. The growth slowed to 4.2% last year. But this is still a very good result from the perspective of the Czech market. Moreover, the growth in turnover varies according to the segment and the size of the store – last year, the most significant was in gastronomy (9.5%), services (7.9%), and speciality retail (7.9%).

“The fashion segment also significantly participated in the overall growth, although it grew only by 3.8%. With its share of 38% to the overall gallery area, it is the largest sector and therefore the most affected. On the other hand, the electronics sector was not successful in the last year and there was a drop in turnover by 5.1%. This was caused by the implementation of new internal procedures of key brands. The performance of collective tenants in the fashion, sports and toy sectors is still growing. Their turnover has been growing for the third consecutive year,” says Milan Mašša, Head of Retail Advisory & Transaction Services at CBRE. 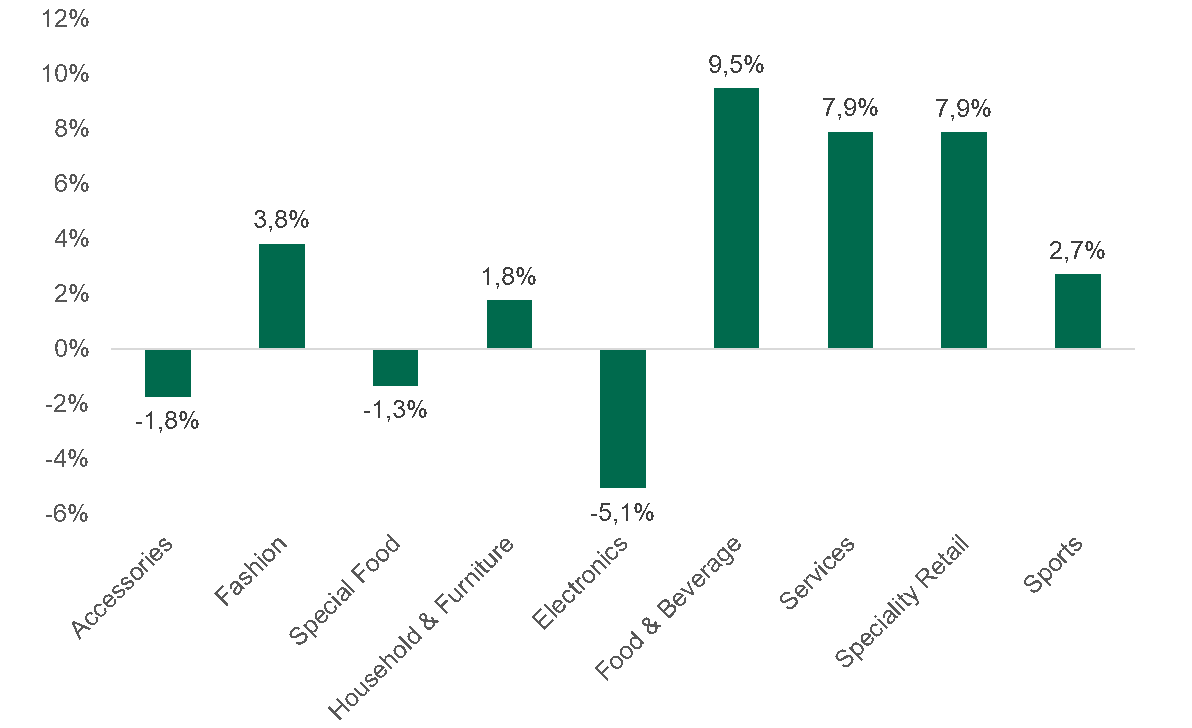 “Gastronomy is the most dynamic sector, which registered the biggest growth since 2015. The average turnover in the gastronomy sector grew by 9.5% y-o-y in the year 2018 and in the last three years, it grew by more than 40%. The services sector registered exceptional results thanks to hairdresser’s and beauty salons and travel agencies, which reported the highest y-o-y growth within the individual services, i.e. 20.2%,” adds Klára Bejblová, CEE Retail Research & Consultancy at CBRE.

“Although the segment of hypermarkets, supermarkets and leisure activities is not included in the index that monitors trends in shopping galleries, even here we have seen a growth of turnover. For hypermarkets and supermarkets over the past three years and for rents over the past two years. The last year was a record year. Turnover increased by 7.6% y-o-y and rents by 1.7% y-o-y. Another major segment that is expected to produce strong results is the entertainment and leisure activities segment. This segment has been dominated by cinemas for a long time. Over the past three years, they reported an incredible growth of revenues for over 40%, of which in 2018 (19%), which is in line with the trend of revenues reported by the Union of Film Distributors,” adds Katarína Brydone, Head of Retail at CBRE.

Rent, despite four years of strong growth of turnover, does not grow significantly

“However, when we look at the individual sectors, there is an interesting consistent trend of rent growth for the four sectors over the past three years. In 2018, the biggest growth was recorded in the household equipment and furniture sector, by almost 12%, also in the gastronomy segment (7.1%), and further across all partial sectors in the given segment, delicacies (3.6%) and services (2.3%). As far as the size of the store is concerned, rent grew in all sizes up to 1,000 sq.m. Despite the continuous turnover growth of anchor tenants, over 1,000 sq.m., over the past three years, the rent in this size category dropped by 6.2% y-o-y,” says Milan Mašša, Head of Advisory & Transaction Services – Retail at CBRE. 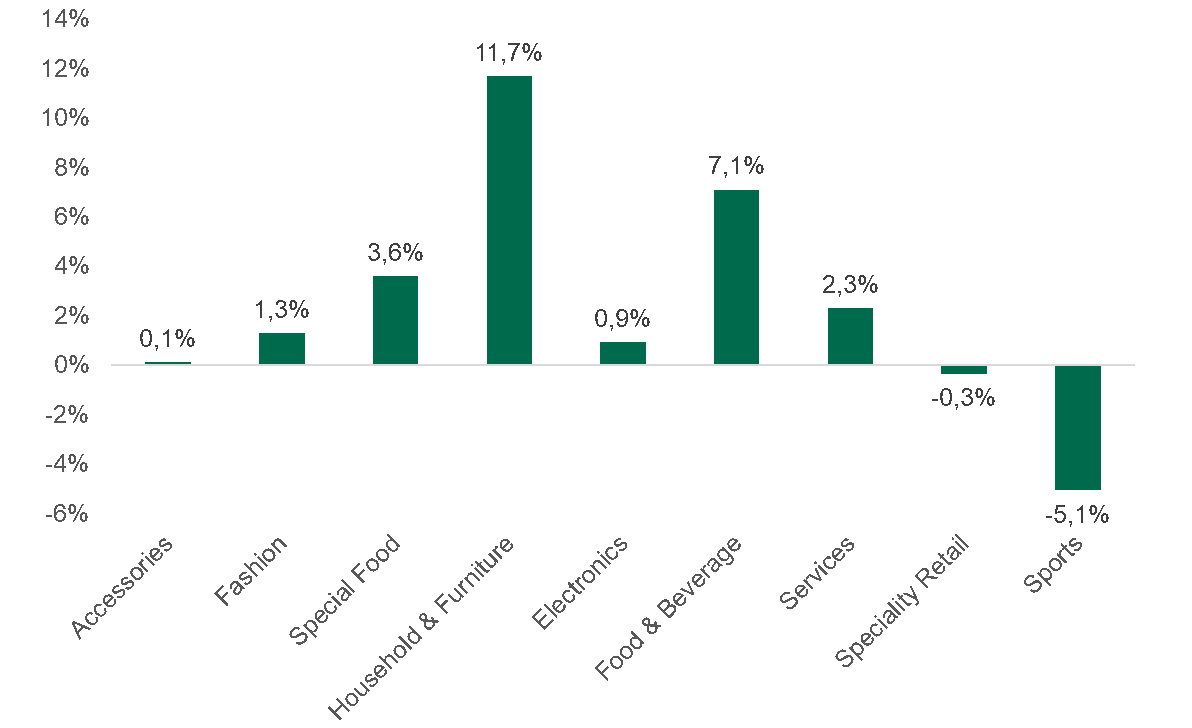 “Although the number of visitors to the centres grew minimally, 2.5% on average in 2018, the average basket has grown consistently every year for the entire existence of the index. Over the past seven years, it grew by an incredible third and it is mainly due to strong turnover recorded over the past five years. This trend is significant in the context of the long-term growth of online shopping. It can be seen that despite strong online growth, the Czech Republic has the second highest online share in Europe, Czechs still like to shop in shopping centres and shopping centres are not weakened as a platform for selling goods and services. On the contrary, both platforms grow,” states Tomáš Míček, Head of Property Management – Retail at CBRE.

About the Shopping Centre Index

CBRE is an expert and the biggest administrator of retail areas in the Czech Republic. It provides comprehensive and complex consulting in the field of purchase and sale of retail assets, rental of retail areas, representing of tenants when entering the Czech market or optimization of the stores network, administration and marketing of shopping centres and retail parks, concept design of shopping centres and project monitoring. Last but not least, it is the leader in retail market research and customer behaviour.