How will automation impact jobs?

We've analysed over 200,000 jobs in 29 countries to explore the economic benefits and potential challenges posed by automation.

AI, robotics and other forms of smart automation have the potential to bring great economic benefits, contributing up to $15 trillion to global GDP by 2030 according to PwC analysis. This extra wealth will also generate the demand for many jobs, but there are also concerns that it could displace many existing jobs.

We have analysed in detail the tasks involved in over 200,000 existing jobs across 29 countries to assess what the potential for automation may be at various points over the next 20 years. We identify three waves of automation that might unfold over this period:

During the first wave, we expect relatively low displacement of existing jobs, perhaps only around 3% by the early 2020s. But job displacement could increase in later waves as these technologies mature and are rolled out across the economy in increasingly autonomous form.

By the mid-2030s, up to 30% of jobs could be automatable, with slightly more men being affected in the long run as autonomous vehicles and other machines replace many manual tasks where their share of employment is higher. During the first and second waves, however, women could be at greater risk of automation due to their higher representation in clerical and other administrative functions​ (see chart).

These estimates are median values across 29 countries, with the UK being very close to the average. Long-term automation could be lower at only around 20-25% in Asian and Nordic countries, but could be higher at over 40% in some Eastern European countries according to our analysis. Explore the results further for your country using our data analysis tool. You can also download the full report for more detailed analysis and commentary. 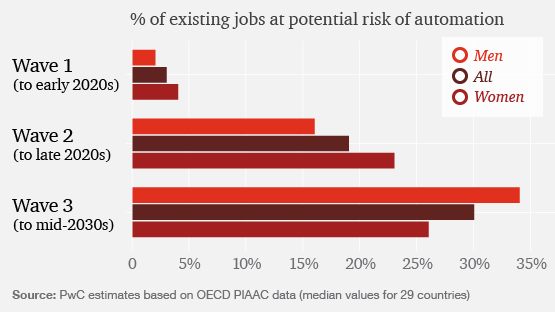