The PCC's Board of Directors approved the annual report including the financial statements. In management the increase in total sales and pre-planned reconstruction of premises was projected together with a modernization of equipment. The Prague Congress Centre visited almost 250 000 participants in 246 events.

Revenues from short-term leases without catering, despite the drop in events due to reconstruction in the period August to October 2017, remained high at 159 million CZK, only 2 % below revenues in 2016. Long-term lease sales showed a year-on-year growth of 2,5 % worth 156,3 million CZK and that is the best result for the past 10 years.

In 2017 the first stage of the interior and the exterior reconstruction of the Prague Congress Centre was completed. The major change was the modernization of the premises, the complete improvement of the technical background, the improvement of the energy economy, the new Wi-Fi infrastructure and innovation in AV technology. At the end of the year, the company launched a brand new, fresh and modern branding.

Important events that took place in the Prague Congress Centre last year were the World Conference of Family Doctors (WONCA) with 4 000 participants, the Annual Meeting of the European Society for Paediatric Gastroenterology, Hepatology and Nutrition (ESPGHAN) with 5 000 participants, or the International Prestigious Symposium on Separation Science (HPLC) with 1 300 participants. The most significant event was for sure the prestigious congress ICCA (International Congress and Convention Association) which attracted 1 264 congress industry experts from 79 countries.

The Czech metropolis has also succeeded in the global competition and occupied the 8th place in the ranking of the most popular congress destinations that the International Congress and Convention Association (ICCA) compiles every year. Prague is now ranked among the world's TOP 10 meeting destinations such as Barcelona, Paris, Vienna, London and Singapore. 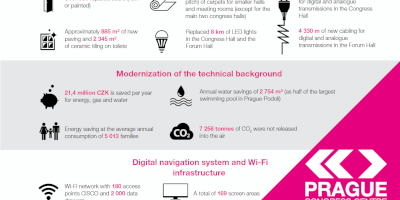