Nominal wages picked up by 8.6% YoY on the back of double-digit public sector wage growth and solid private wage increase. One more reason, why the central bank might hike sooner than expected

As in the previous quarter, robust wage growth was seen in the non-market segments, which is influenced by 10% increase in compensation of the civil servants and 15% increase for teachers in 2H17.

As such, wages in non-market sectors increased by 12.2% year on year in 1Q18. However, wages accelerated further also in market sectors to 7.8%. The annual dynamics itself ended slightly below the Czech National Bank's estimate of 8.1%, but the Czech Statistical Office revised the previous year's data downwards, so wage acceleration compared with 4Q17 was stronger than expected by the CNB.

Also, results of some wage negotiations for this year have not yet come through in 1Q18 figures which is why wages might rise even more next quarter. 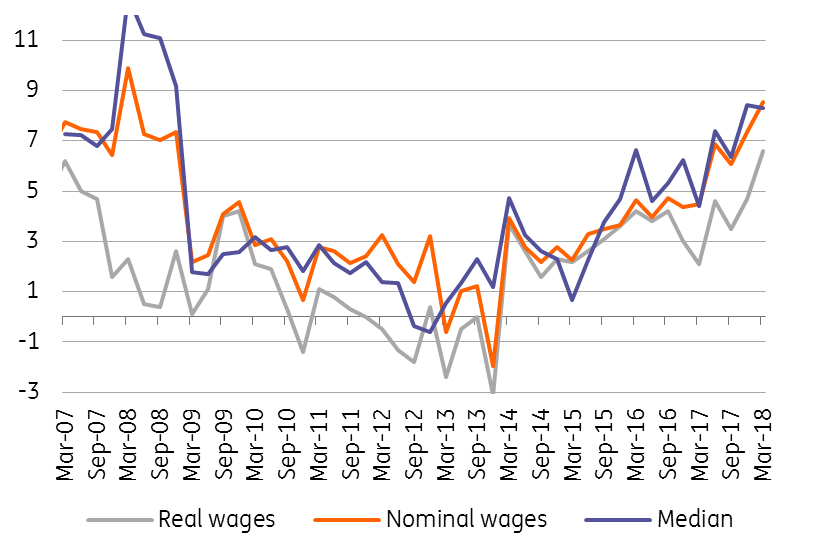 All in all, wage growth continues at a brisk pace at the start of this year, and the overall wage dynamics might reach 8% this year after 6.2% growth in 2017 (after today's’ revision from 7%).

This will be driven not only by administrative factors and salary increases in the public sphere but also the overheated labour market with a lack of adequate workforce accompanied by increasing labour union pressure. Real wage growth will be over 6%, which will be among the highest dynamics over the past 15 years. This will be the main factor supporting household consumption.

From the point of view of the central bank, there is no reason to delay further tightening of monetary policy. The rapid rise in wages, the likely return of May inflation above 2% and, in particular, the weaker crown compared to the CNB's assumptions, are the reasons why, in our opinion, the likelihood of a further hike begins to move gradually towards the next CNB meeting at the end of June.