Policymakers meeting in Bonn, Germany, for the COP 23 climate conference have an excellent opportunity to accelerate the transition to sustainable transport via electric vehicles, writes Ulrich Spiesshofer, CEO of ABB.

China recently became the fifth country to say it will eventually phase out cars powered by fossil fuels. Like the four other countries – Britain, France, Norway and India – China sees this as a way to meet the goals of the Paris climate accord. And like the others, it is heavily promoting the adoption of emission-free electric vehicles combined with renewable energy generation. 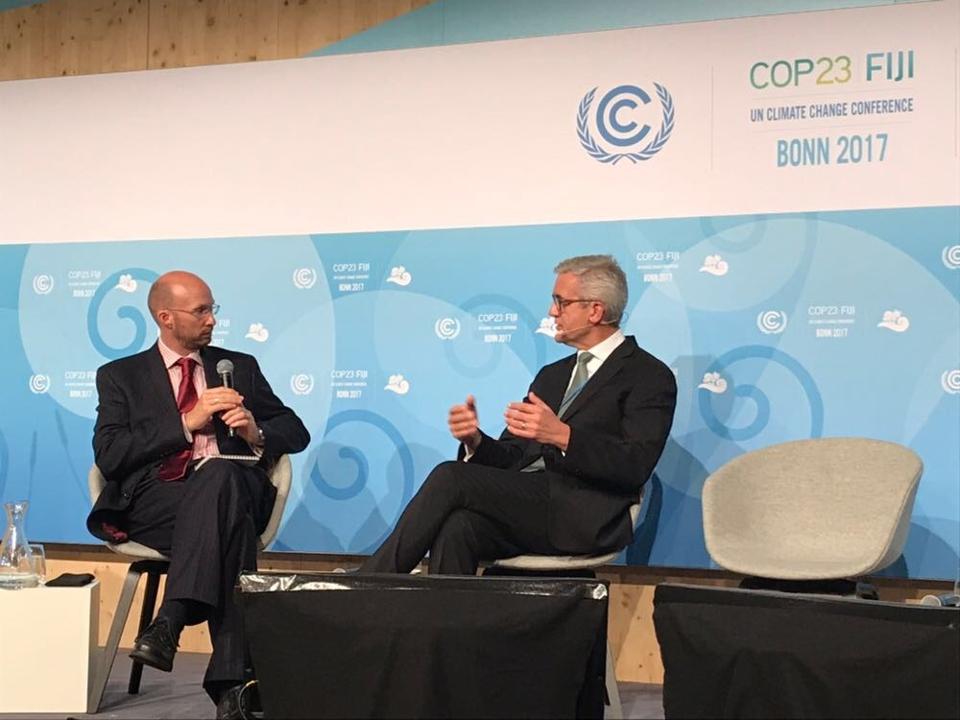 Now, as the 195 signatory nations to the Paris accord meet in Bonn, Germany, for the COP23 climate summit, policymakers have an opportunity to make an even bigger global push for e-cars. Now that the technological challenge of electric mobility has been solved and many new e-vehicles will come on to the market over the next three years, the focus needs to be on providing the necessary charging infrastructure. And to make e-cars a truly sustainable form of transport, charging stations must be combined with renewable energy.

Policymakers already have the weight of new technology on their side as they make this push for faster adoption of electric cars. In the medium term, electric vehicles will not cost more than conventional vehicles - prices are falling rapidly as production numbers rise - and the vehicles’ lower operating costs already make them attractive to many car buyers.

The most critical technology that goes into any e-car is the batteries that power it. These are becoming more affordable even as they grow more efficient and global demand accelerates. Thanks to the latest generation of batteries, the range of vehicles has been extended to slightly over 300 kilometers (187 miles) between charges. What’s more, new “flash” charging technology has reduced recharge times to as little as 14 minutes – a dramatic advance from the overnight charging that limited widespread adoption of the earlier generation of electric cars.

The biggest remaining impediment to the adoption of battery-powered cars is the dearth of charging stations. For the electric car to become a major form of personal transportation, consumers need to know that, no matter how far they venture from home, they will be as certain to encounter a charging station as they now are to find a filling station. This is precisely where policymakers are now in a position to enable a quantum leap in e-mobility.

As a technology leader, ABB is engaged in the effort to develop flash-charging technologies for electric vehicles, extend the power-grid connections that support these charging systems, and move towards renewable power generation. In this effort, we are one of several companies working with transport officials around the world to set up fast-charging networks for electric cars, buses and other types of transportation. To date, we have installed cloud-based charging solutions in more than 50 countries so they can seamlessly manage the flow of electricity, service information and payments.

The private sector is ready to do its part, but policymakers must take the necessary steps to support and enable the effort. If we all work together, we can make the transition to sustainable transport by combining electric vehicles with renewable power generation, connected through smart grids.

Many policymakers understand the environmental, public health and economic benefits that the widespread adoption of electric cars could generate. That is why many governments offer subsidies and rebates to consumers who purchase qualifying vehicles. But it is just as vital to promote investment in the necessary energy infrastructure.

China, where last year alone more than 350,000 electric vehicles were sold, has been more proactive than most. It is pushing to raise its total to 800,000 charging sites by the end of 2017, and Chinese planners intend to build a network to serve 5 million e-cars by 2020. Yet there are currently an estimated 290 million vehicles on China’s roads. Replacing them all with electric vehicles will prove extremely challenging if the charging infrastructure is not in place.

There is a historic irony behind the world’s effort to wean itself from fossil-fuel cars.

Schoolchildren are taught that Karl Benz invented the first automobile in 1885 in the German city of Mannheim. It’s less well known that other inventors across Europe were developing the earliest electric cars at around the same time, inspired by the recent introduction of the lead-acid battery.

For the first 20 years of the auto industry’s existence, battery-powered vehicles outsold those, like Benz’s, that were powered by fossil fuels. That changed when major improvements, like the muffler and the automatic starter, helped give gasoline-powered vehicles an edge. So did the emergent petroleum companies, like Standard Oil in the United States, which had a ready incentive to build networks of filling stations to sell fossil fuels to a mass market.

New advances in battery technology are now shifting that edge back in favor of electric vehicles. While consumer sentiment and other powerful market forces underlie the long-term transition to e-mobility, it may take a public policy push to overcome the entrenched status of filling stations and ensure a rapid and orderly changeover to e-cars. The latest round of governmental announcements show progress in the right direction.

Yet there is much more that can and should be done. Possibilities include providing tax breaks for investments in charging systems; establishing international standards for charging protocols; funding additional research for flash-charging technologies; or even mandating installation of charging stations at some existing filling stations, such as those located on public highways.

Technological advances have given this historic opportunity to run the world without consuming the earth. The key is for all of us work together to combine electric vehicles with renewable power generation, connecting them with a smart grid. As the environmental and public health concerns of our longstanding reliance on fossil fuels have grown, it is clear just how much we stand to gain by embracing new and improved ways to travel. The faster we can make this happen, and rid our cities of air pollution and our atmosphere of greenhouse gas emissions, the better.