The golden age of robotics

In March, the artificially intelligent AlphaGo computer system beat Korean grandmaster Lee Sedol in four games of Go, with just one loss. This was a historic match. It was the first time that the world witnessed the power of artificial intelligence in Go, a 2,500 year-old game that is exponentially more complex than chess and requires a higher level of intuition than any other game.

Robotics has come a long way since 1961, when the first industrial robot prototype was developed in New Jersey. In 1974, a team led by Björn Weichbrodt at ABB created the IRB 6, the world’s first commercial, microprocessor-controlled robot, which became the foundation for today’s industrial robots. 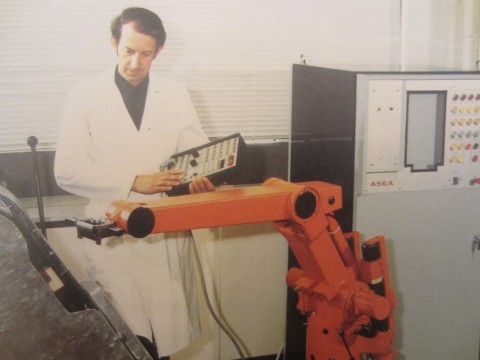 Björn Weichbrodt with the first IRB 6

Since then, robotics has advanced significantly, and robots are now found in every industry, from automobile manufacturing to logistics. From 1993 to 2007, economists found that robots increased labor productivity by 0.36 percent per year – or more than the 0.34 percent generated by the use of the steam engine to mechanize production from 1850 to 1910.

Now, rapid advances in machine learning are revolutionizing the field of robotics. Researchers have found that machine learning will contribute as much as $15.7 trillion to the world economy by 2030, according to a study by PwC. That’s more than the combined output of China and India, two of the world’s fastest-growing economies.

Gains from the use of machine learning will come primarily from the increased flexibility associated with automated processes and higher-skilled labor forces. Consumption will rise as customers buy more personalized, higher-quality goods. Countries like China, which derive a large percentage of GDP from manufacturing, could see their growth rates rise by 1.6 percentage points, according to an Accenture report.

Along with higher capabilities, robots have also become more affordable for industries. In 2015, robot sales rose by 15 percent, by far the highest level ever recorded for a single year, according to a report by the International Federation of Robotics.

ABB, which sold more than 300,000 robots since 1974, is ready for this future. It is rapidly staffing up its robotics division, hiring three people a day, on average.

Factories across the world are becoming smarter by using internet-connected sensors and cloud computing to gather and analyze vast quantities of data, and then turn the results into precisely targeted actions. Because of this, inefficiencies are eliminated, and factories are performing at levels that were considered theoretical in the past.

Modern industrial robot systems do not need to be shut down for programming or optimization. Engineers can deploy simulations and offline programming tools for that, using the same software that runs the robots in production. For instance, programmers can perform simulations of how the equipment would work on the shop floor and prevent costly collisions before they occur.

Advanced robots will increasingly be utilized in jobs that are either too strenuous or dangerous for most humans to want to do them. And companies will gain because robots are remarkably cost effective, typically delivering return on investment within their first year of deployment in the manufacturing sector, for example.

Robots that use machine learning will increasingly assist humans with their work. One of the world’s first truly collaborative robots is ABB's YuMi, which is designed to function alongside workers on the assembly line. YuMi’s sensors let it know when a person is in its way, a significant change from an earlier generation of robots that had no way of doing this.

Robots will take away jobs that humans no longer wish to do, and will create new jobs. South Korea, Japan and Germany are the top three nations in terms of robots installed per 10,000 employees. Yet, they have some of the world’s lowest unemployment rates. According to the McKinsey Global Institute, more than 90 percent of jobs will not be fully automatable in the future. Instead, robots and humans will increasingly work together. Machine learning and information technology are also creating new business models, which will bring fresh opportunities.

Businesses will need to invest in training their workers so that they can rise to a higher vocational level, with more pay and higher job satisfaction. There are precedents for such far-reaching changes in the labor market: The advent of mechanical harvesters eliminated most agricultural jobs, but displaced workers eventually found employment in assembly lines or new sectors of the economy.

There are still many things that robots cannot do. For instance, they cannot react to change like humans do. While they are equipped with vision systems and sensors, they cannot understand the conditions of the environment around them. In other words, robots cannot do tasks they have not been programmed to do.

But with advances in machine learning, robots are becoming remarkably sophisticated. The day is not far off when they will be able to react suitably to changes in their environment and adapt to changing tasks, using their collective knowledge and experience. Companies like ABB, which is investing $1.5 billion annually in research and development and has partnered with 70 universities, are well positioned to build a wide range of end-to-end digital solutions. Such solutions can leverage incoming data from sensors and make immediate control decisions.

These revolutionary changes are overwhelmingly positive. The Fourth Industrial Revolution is ushering in the golden age of robotics, with the potential to drive significant increases in productivity across multiple industries and transformative improvement in our working lives. Trained people, working with smart robots, will help deliver this future of a better world.