After contracting in 2019 for the first time since 2009, world trade will grow again in 2020, but only by 0.5%. In our base case, we expect the US to maintain its tough stance on trade, but the pressure will come more from words than action

With two months of data for 2019 still to be reported, world trade in goods is on track to have contracted 0.5% for the full year. Industrial production in advanced economies, a major driver of world trade in goods, has been a washout too. The eurozone, US, and Japan all experienced declines over the last 12 months. The outlook for 2020 is not particularly bright either, with manufacturing Purchasing Managers Indexes (PMIs) in the US and China having bottomed out while those in the euro area point to continued contraction (Chart 1). In the euro area, inconclusive trade negotiations with the US and the ongoing threat of auto tariffs, as well as uncertainty surrounding Brexit, continue to weigh on activity. This matters a lot for world trade, where the EU accounts for just under a third of flows.

Our model shows that the momentum in global industrial production, subdued as it is, implies growth of around 1% in 2020, and underlying growth in international goods trade of around 0.6%. When we add to this underlying growth the direct effects from the trade war, we derive our base case forecast for world trade and the growth rate if downside or upside risks materialise (Chart 2). 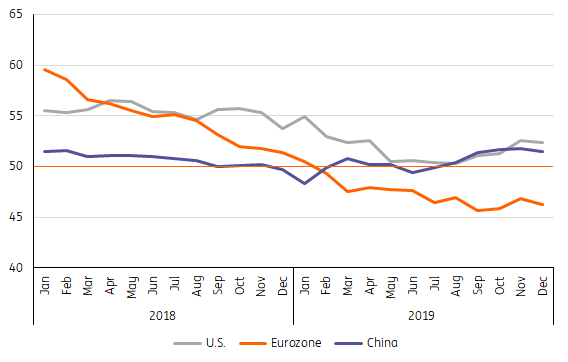 In our previous outlook, we forecast that US economic conditions would start deteriorating from the fourth quarter of 2019. We expected that this would lead to falling approval ratings for President Trump, forcing him to compromise on some of his demands in the trade negotiations with China. Things have played out a bit differently, with US growth performing better than expected and approval ratings holding firm.

In a limited 'phase one' deal agreed last month but yet to be signed, China agreed to get tough on protecting Intellectual Property, enhance market access for American financial services firms and refrain from devaluations of its currency. China also agreed to import more agricultural products from the US although this commitment has since been thrown into question. Meanwhile, the most difficult issues remain unresolved and most of the trade war tariffs remain in place – where they are likely to stay throughout 2020.

Base case: tariff stalemate in 2020

Our base case is that we expect the US to assume a tough stance and step up its trade war rhetoric, but for tariffs to remain largely at their current levels in 2020.

A comprehensive deal with China before the election seems unlikely, though another limited ‘deal’ might emerge if weakening US economic conditions or the election calculus demand it. In that case, some tariffs may be rolled back, but only to a limited extent while both sides monitor each other’s conduct.

In the meantime, negotiations between the US and EU continue. A French initiative to implement a digital services tax, which will hit US tech giants (other countries are likely to follow suit, pending an OECD initiative to agree on an international solution) has not helped the situation, with the US threatening tariffs on imports from France, and France in turn, threatening EU-wide retaliation.

With the EU-US trade balance in the Trump administration’s sights, US tariffs on European cars remain an ongoing threat, even after the US let its own deadline pass for taking action on the issue. Still, the counter threat of damaging retaliation by the EU should keep the President from following through on his threat in 2020. A proxy war might be fought over tariffs on aeroplanes, but the trade flows affected are relatively limited. 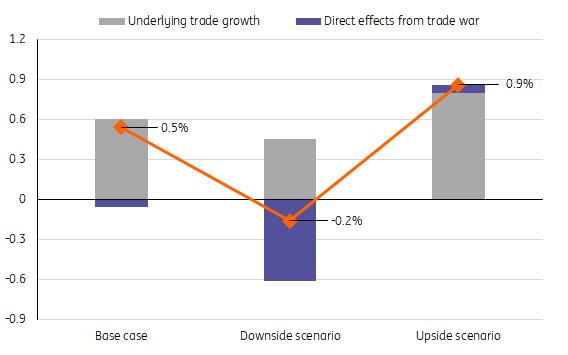 There is a clear downside risk to this base case. In President Trump’s eyes, and perhaps those of his potential rivals for the Presidency, the trade war so far has delivered results. The US trade deficit has narrowed during the last couple of months. There have been several ‘trade war deals’, involving other countries variously adjusting tariffs, pledging to reduce their exports to the US, or pledging to increase imports from the US.

US firms have been damaged by higher input prices and retaliatory tariffs, and US farmers are receiving subsidies in an acknowledgement that the trade war has hit sales. But it is notable that the US election is not expected to be fought over trade policy this time around.

The most likely place for tensions to flare up is between the US and China and between the US and the EU. The details of the US-China ‘phase one’ deal are a potential sticking point. The closest weapon to hand for the US is the tariff increases it prepared in December 2019. These would take the average tariff on US imports from China to 24%.

In this downside risk scenario for international trade, US-EU trade negotiations also break down, resulting in a 25% increase of US import tariffs on EU cars, and retaliation by the EU (limited to a similar extent as seen in the steel and aluminium dispute, when EU actions affected products worth around half of the value of the products affected by US tariffs).

If the downside scenario materialises midway through 2020, the combined effects of tariff increases and a further hit to industrial production would spell a second year of contraction in world trade, which we estimate at -0.2%.

An upside risk is that the US and China strike a comprehensive trade deal in 2020. In that case, we assume that half of the tariff increases implemented during 2018-19 are rolled back. The US-EU trade negotiations also make progress in this upside scenario, taking the threat of car tariffs off the table for good.