The EU has until Thursday to stop President Trump from raising tariffs on European steel and aluminium. If current talks fail, higher tariffs will become a reality. The EU will then retaliate which will be felt most in the US bourbon and whiskey, yachts and boats and motorcycle industries

The EU is in a difficult spot. President Trump wants voluntary export restrictions on steel and aluminium from the EU in return for permanent exemption of the elevated US tariffs on the imports of these metals. By initially demanding that it will be permanently, and unconditionally, exempted from these additional tariffs, the EU has taken the principal stance that it does not want to breach the WTO rules for international trade. This makes it difficult to give in to President Trump's demands without losing face.

But under pressure from Germany, talks have begun to move away from a fight about principals towards a more practical approach that tries to avoid a trade war that would be harmful to both sides.

According to the trade-focused news agency Bordelex, word has it that Washington and Brussels are edging towards an informal deal that would cap European steel shipments to the US at 90% of 2017 imports. In that case, the EU does not have to officially announce it will limit its exports to the US and thereby break WTO rules. On top of this, the EU is understood to have agreed to negotiate industrial tariffs and liquefied natural gas trade.

But while it could be that a solution is found that keeps the exemption of the tariffs for the EU in place, it is possible negotiations will fail, and higher US tariffs on steel and aluminium will become a reality. In that case, the EU will likely retaliate, and that could be the start of a tit-for-tat trade war between the two trade giants.

Economic damage of tariffs will be limited

The EU will retaliate by imposing tariffs on 185 US export, according to a list already published.

These measures would hurt the economy on both sides of the ocean only a little. The direct impact of the steel and aluminium tariffs on the European economy are limited because exports of steel and aluminium to the US make up no more than 0.3% of worldwide goods exports by the EU and represent 0.05% of the EU's GDP.  And some of that will be lost anyway due to lower US demand as prices increase due to higher tariffs.

The effect of the retaliation on the US economy is negligible too. Most of the products on the list seem to be politically motivated because they target the constituency of important American politicians. For example, bourbon comes from Kentucky which is the home state of senator Mike McConnell. The total value of products charged with the tax is small: $2.8 bn which represents only 0.1% of US exports worldwide. Nevertheless, the targeted industries will feel the pain.

But the damage will be contained because 88% of EU exports of steel have other destinations than the US. On the national level, steel industries in Sweden, UK and Greece have the most exposure to the US, but the German, Italian and Dutch exposure are the largest in absolute value (see Fig. 1).

For aluminium, the French, Italian, Austrian and UK industries stand out as prime victims of the US tariffs. But also for aluminium holds that the lion’s share of EU exports goes to other countries than the US. France is most dependant on American demand with around 6% of its aluminium exports going to the US. 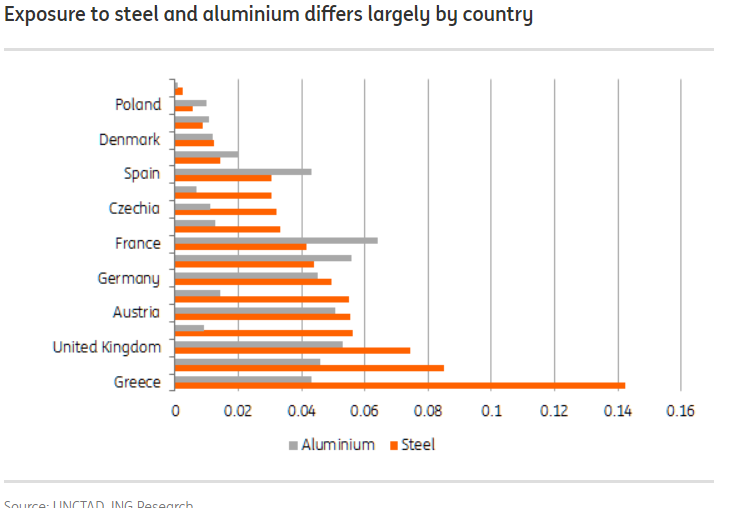