According to the latest CBRE analysis of the Czech Industrial & Logistics market, CBRE monitors a significant increase in end-user demand and resulting developer and construction activity in the still relatively unestablished location of Northwest Bohemia. Combined with already strong activity in West Bohemia, the region of West Northwest Bohemia currently represents the most active region in the terms of construction activity for the first time in history and even outpacing the Greater Prague Region. The West Northwest Bohemia region will be a driver of new supply in 2017 and together with the Greater Prague area will account for approximately 80% of newly to be delivered space in the Czech Republic in 2017.
In the entire year 2017 almost 300,000 sq m is expected to be delivered to the West Northwest Bohemia market, consisting of the Usti nad Labem, Karlovy Vary and Plzen regions. As a result, the size of this market will increase by more than 23% year-on-year.

Figure: Space under construction in the Czech Republic by region, Q1 2017 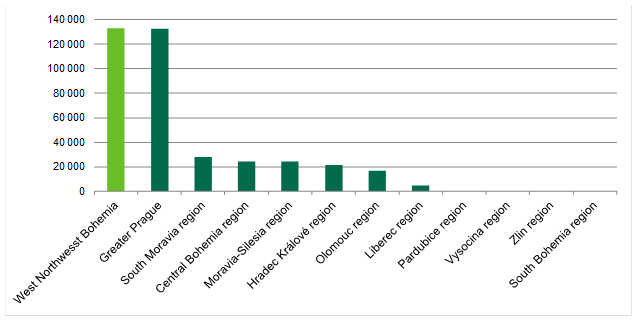 “West Northwest Bohemia is right in the centre of Europe and therefore fundamentally longterm attractive for logistics and manufacturing operations in which proximity to suppliers and clients is of key strategic importance to businesses.”

The West Northwest Bohemia region profits from the continuing trend of large e-commerce companies, traditional retailers as well as FMCG companies entering or expanding in the Czech Republic to supply the German and wider European markets. These companies can still take advantage of significantly lower labour costs whilst maintaining the high quality level of services. Moreover, the region provides perfect road connections to Germany and to the rest of the Czech Republic and Europe. Currently two motorways, the D5 (through Plzen) and the D8 (through Usti nad Labem) provide great accessibility to and through the region. It is expected that by 2025-2030 a direct motorway connection from Prague through Karlovy Vary and Cheb to Germany will be completed.
Demand in the region has been historically dominated by manufacturing companies but has been outpaced by logistics end-users in 2016. We expect that demand from both groups of end-users will continue to be strong also in 2017 and more or less in balance going forward.