On September 18, Thai Food Festival was opened at the Hilton Prague. It is taking place in the Café Bistro till September 28. The opening ceremony was organized in presence of the Ambassador of the Kingdom of Thailand in the Czech Republic, Mr. Thanarat Thanaputti, Regional Director of the Toursim Authority of Thailand from Frankfurt Ms. Suwalai Pinpradab and Hilton Prague General Manager Mr. Michael Specking. The original Thai food is prepared by guest Chefs Mr. Sathaporn Boodmeechai and Ms. Bongkot Anutarapong, both from a luxurious hotel chain Banyan Tree in Phuket. During the festival, guests will have an opportunity not only to taste the authentic Thai cuisine but also to admire Thai handicrafts and culture including traditional Thai dances every evening.

Amongst others, the following dishes are part of an open buffet available daily from noon till 3 PM and from 6 PM till 10 PM at CZK 890 per person: 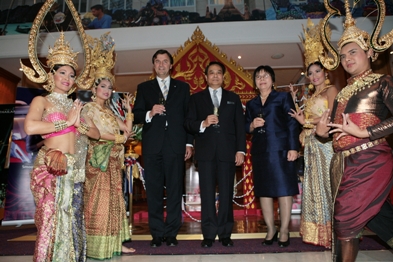 Like all local and national cuisines, the food of Thailand reveals a great deal about the country - it reflects its political history, its trade, and its geography. Thailand sits between the cultural and political powers of India and China, and its food is clearly influenced by both. Yet Thailand's food, like her people, has maintained its own distinct identity.

As with meals throughout Southeast Asia, the Thai meal is built around rice. Southern Thai people eat long-grain rice, while the northerners favor short-grain or 'sticky' rice. Noodles, probably introduced from China, also play a role in Thai cooking. Curries and other hot dishes are eaten by the Thai more as sauces than entrees, flavoring the cool rice. Meat is very expensive, and beef- or pork-based recipes often call for much less meat than we are used to.

Because Thailand forms a crescent around the Gulf of Thailand and the country is etched with hundreds of miles of rivers and canals, fish is a staple of the Thai diet. Fish sauce (nam pla) or shrimp paste (kapee) appear in nearly every recipe. The other distinct flavors of Thai cooking come from the indigenous spices: coconut milk, lemon grass, tamarind, ginger, black pepper, garlic, sweet basil, cumin, shallots, and green onions. Last but not least is the chile, having arrived with Portuguese traders early in the 16th century. The chile has become a central player and much Thai food is fiery hot. Thai food is either stir-fried or steamed, primarily in a wok.