2011-02-26 00:00:00
Company:
Address:
In the very center of Prague, right on the plaza in front of the InterContinental Praha a true Bohemian Hog Feast known to locals as “Zabijacka” will be celebrated on Saturday 26th February between 11:00 am and 5:00 pm.

Commemorate with us the traditional Czech pre-Lenten Carnival called Masopust (literally “good-bye to meat”). It is not only a time of merrymaking and masquerading, but also a time of plenty in which hog feasts become a celebration before Lenten according to folklore heritage.

"Fat Thursday" usually marks the start of Masopust and involves the slaughter of a pig and the serving of the traditional Czech meal of roast pork with sauerkraut. According to tradition, this was a day filled with eating and drinking to keep your strength up all year long. To make good use of the entire pork other specialties have evolved from this ceremony including the making of black and white pudding, brawn soup, pork aspic also known as “Tlacenka” just to name a few. Some of these culinary inventions have remained so popular that you can find them almost all year round in many local restaurants, but they are best consumed when prepared in the Masopust season.

It has become a custom for the InterContinental Praha to revive the Masopust tradition, now in the fourth year, and to celebrate the ceremony of hog feast and every year it is gaining in popularity. The last known Zabijacka took place in the Old Town during the period of the First Republic when Tomas Garrigue Masaryk ruled Czechoslovakia. “Masopust and the art of Zabijacka is one great way to connect with the local culture and folklore. To revive this ritual in the very center of Old Town is appreciated both by Praguians and by visitors alike” commented Kees Kramer, General Manager of the InterContinental Praha.

Bring your friends and family for a truly authentic “Zabijacka” experience which is organized with the butchery „U Dolejších“ boasting a 100-year family tradition. Sample some of the many freshly prepared hog feast specialties. The hotel’s own Pastry Chef, Vaclav Krejcik, has made great efforts to dig up some of his grandmother‘s pastry recipes, which will be on display for you to taste. Food is also available for take-away, and is served along with Czech draft beer, as well as Becherovka or plum brandy „Slivovitz“ to keep you warm. Live Music „Staroceske Duo“ will ensure a great atmosphere. 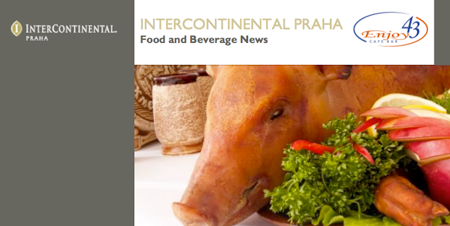